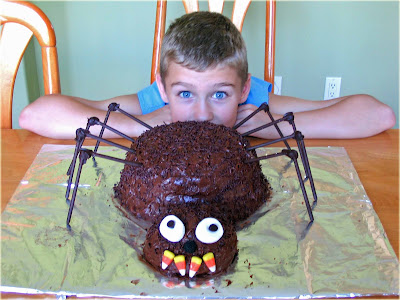 A few of you have asked for pictures of the cakes I made for the school's Spring Carnival.  I only have the picture of the spider cake because I took this picture in the summer when it was my son's birthday.  Three of the boys at his party asked if I'd be making it for the Spring Carnival so I made it again.  We were in too much of a rush to get the cakes to the school in the morning to get pictures of the other two.

One was an igloo cake.  We used marshmallows cut in half  as the "bricks" of the igloo, kept the entrance hold chocolate, spread some white icing around the igloo and then added coconut to it so it looked like snow and also sprinkled snow on the igloo itself.  Looked really good.  Never thought of it at the time, but adding a penguin or two would have been a great add on.

The last cake was a popcorn box - theater style. Used fruit leather to make the orange and red stripes on the box, made it an angled box at the bottom, cut the top in a dome shape and then stuck real popcorn all over the dome part.  It looked great and my daughter had a great time sticking the popcorn on with white icing so we could pile it high.

These are pictures of two cakes I made last year - had a bit more time to work with so was able to make some more detailed ones.  This one is a crocodile cake. 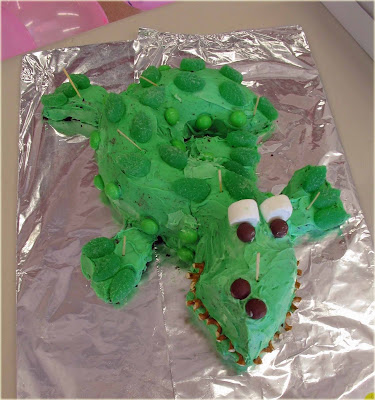 This next one is a dragon cake. Just love this cute little guy :D 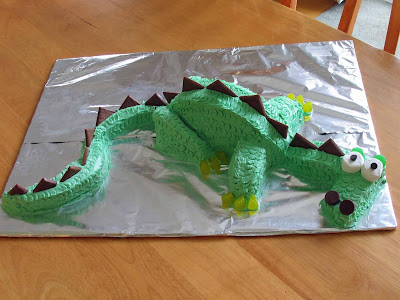 This last one is a pirate ship cake I made a few years back which was a huge hit with younger boys.  Best part is it is really an easy cake to make. 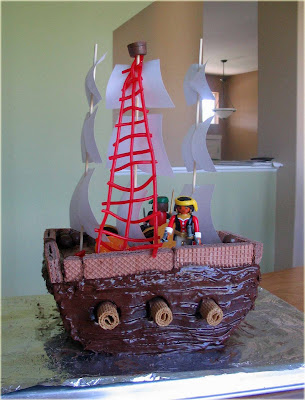 Thanks for asking about the cakes :D The business of the week of the carnival is always worth it because the school makes between $4,000 and $5,000 by putting this carnival on and it is a fabulous family event. I got to work at the Crazy Hair station and had a blast creating "crazy hair" on a lot of kids LOL!

Blessings to all of you :D

Email ThisBlogThis!Share to TwitterShare to FacebookShare to Pinterest
Labels: Miscellaneous

Those cakes are amazing Marisa! The dragon is adorable and the spider manages to be cute. And I just have to say your son has the most amazing blue eyes I've ever seen and my own son has some pretty blue ones too.

OH my gosh you have many talents.. I LOVE these. I think that dragon cake is amazing.. We have big spiders like that here in NC.. I think your son looks adorable behind that cake.. My eyes would be alot wider.. I ship too..You are so good at this.. These are incredible.

Holy smokes GF!!! These cakes are not only delicious looking, but oh so fabulous!!! YUMMY!!! Wish I could take a big junk out of them and eat them...LOL!!! Hugs ~S~

WOW!~ Aren't you the REALLY creative one--cake baking me?...not so much~~

Holy Moly Girl! You've got SKILLS! These are amazing! Love the photo of your son and the spider cake. Too CUTE! :)

Wowee, Marisa, what a talent you have for making fantabulous cakes!! :-) As much as I hate spiders, that spider cake is pretty cool! And what a cute son...

Holy smokes girl! These are fabulous!!!!!

WOW! You get mom of the year... these cakes are totally COOL! Oh awesome croc's... so very creative and I bet the kids LOVED them even last years... super fun.

Marisa, these cakes are awesome!! What a cool and creative outlet! I love them!!!

wow!!!! Love these!!! When Jake was growing up, he would always let me know what kind of cake to make. My sister had the Australian Women's weekly cake book. He even wanted a sewing machine one year...was fascinated with my mom's machine :) Your cake walk sounds a little more fancier than ours...can we hire you? LOL

WOW!! These are fabulous Marisa, too too fun, girl - you are soooo talented!! *STAMPIN HUGS* Alex

Oh my! Those are amazing! Such talent from someone who claims to only have one creative gene!

HOLY MOLY!!!! Marisa these are INCREDIBLE!!!! I thought they were all amazing and then saw that ship and nearly fell off my chair!!! You are SO TALENTED!!!!!

Wow! Not only are you a talented paper crafter, but also a cake decorator. These are awesome! 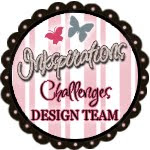 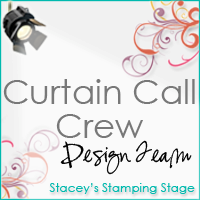 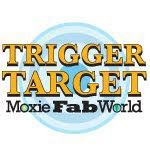 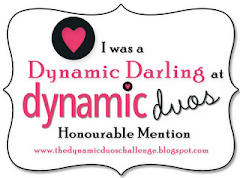 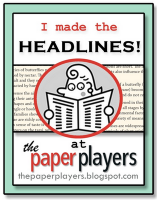